There are a few good reasons why contractors in the liquid waste industry should consider adding grease handling and hauling to their portfolio of services that they can offer to customers.

For one thing, because it is specialized, not everyone gets involved with it and so there is less competition, and less competition leads to higher profit margins as most grease haulers will tell you. Plus, what could be considered “barriers” for entering into the grease trap servicing business, i.e., that most grease hauling is regulated due to the specifics of disposing of the waste, could actually result in financial gain because the higher the barriers, the more profit to be made for the contractors that do haul grease and do abide by local and state regulations. As Mike Lozano, part owner of GTO Grease Trap Services puts it: “There are basically three ‘barriers’ to entering the grease trap, grease hauling business. One, is to make sure you use the right equipment, second, make sure you have the right people who can deal with the dirt, odor and toughness of the work and, three, make sure you have all the right permits and certifications.” Mike’s company GTO, some refer to the acronym as “grease traps only,” is a company that only services grease traps, and he tells me that “a positive aspect of the grease-trap servicing business is that the work is steady, and not so much effected by shifts in the economy or changing weather and seasonal conditions.” No matter what the state of the economy, people will still eat in restaurants, even though they may choose to dine at a fast-food establishment rather than a two-star restaurant in tighter economic times. Kids, teens and adults attend school and universities no matter what, prisoners still get three meals a day regardless of the weather or the state of the economy, and hospitals operate 24/7/365. Because cooking equals grease, commercial or industrial kitchens are the kinds of institutions that grease haulers generally service. Let’s take a closer look at the grease hauling business.

Every day restaurants, schools, universities, prison mess-halls, hospital kitchens, and other food processing establishments produce tons of fat, oil, and grease, called FOG in the wastewater industry, that all needs to be collected, stored, disposed of, or recycled into reusable product. In addition to cooking oils, fats, and grease, FOG bearing materials also include lard, butter, shortening, margarine, tallow, a form of rendered beef or veal fat, as well as the water used to wash kitchen equipment and floors. Because of its organic nature, FOG is not your ordinary waste product. FOG stirs up a lot of discussion and even controversy in the halls of municipal and state legislatures, in newspapers, as well as in lobbying efforts of various environmental protection agencies and groups. That’s because FOG poses a potentially dangerous threat to safe and clean waterways and reservoirs.

Municipal Monitoring and Prevention of FOG-Clogging

Many municipalities have become actively involved in preventing FOG from entering public sewer systems because studies have demonstrated that major sewer blockages are usually caused mainly by an accumulation of FOG, roots and other debris, or their mixing and combining. FOG, when cooled, hardens, and the blockages it causes can seriously reduce the capacity in the sewer lines, which can result in sewage spillage onto local streets and/or private property. In other words, FOG has the potential to become a major public health and safety issue, and the responsibility for FOG prevention and remediation requires the combined efforts of Food Service Establishments (FSEs), municipal governments, public works programs, and the contractors and waste management firms that are hired to do the work of grease trap servicing, emptying, hauling and disposing of the FOG.
For example, the city of Taunton, MA has a designated “FOG Implementation and Enforcement Agent” named Kevin Duquette. After conducting much research on FOG-Clogging and its control and prevention Mr. Duquette tells me that he instituted the program in 2009 as part of “consent orders from the State” to look into the problem and create a FOG-Busting, awareness, education, and prevention program. “What is interesting about our program,” says Mr. Duquette, is that it “brings together seemingly independent organizations such as the local Sewer Commissioner’s Office, the local Plumbing Inspector Office, and the State Board of Health.” Each entity regulates a different component of the complex systems of water and sewage flow. As Mr. Duquette explains, “while the Sewage Commissioner monitors the sewage system as a whole, the Plumbing Inspector’s job is to monitor the installation of grease traps, at the same time as the Board of Health is concerned with the overall well-being of citizens as well as general maintenance of the systems.” “It is the Public Health Board that actually visits each establishment twice a year” explains Mr. Duquette, “and so they have the most hands-on experience with what is going on at the FSE level.”

Mike Lorenzo and Sean O’Reilly, owners of GTO Grease Trap Services, have carved out a nice niche business, servicing exclusively grease traps. “We service mostly internal grease traps” says Mike, “and that way we build a more personalized connection with our customers.” Mike continues, “we found that it’s the kind of work most people won’t do, or care to do, and we have made a successful business from it.” GTO, with its 5 pumper trucks, can be seen at any number of restaurants and at almost any kind of “institution” such as “hospitals, nursing homes, retirement communities. You name it. If it serves food and produces FOG, we service it” says Mike. The company services the entire Delaware Valley (PA, NJ, and DE).
GTO’s fleet of service vehicles include 4 2012 F550s with cab and chassis, each carrying a 1,200 gallon aluminum tank outfitted with Masport Vacuum/Pressure pumps that are equipped with “heavy duty bearing and end thrust protection, which prevents the rotor from coming into contact with the end covers during operation.” For their largest jobs they employ a 2012 International 7600 truck with an all-aluminum tank that has a 4,000 gallon capacity. Mike says that “standard at most jobs is 238 ft. of industrial hosing that easily stretches from the trucks to most internal grease traps.”

As part of their grease trap collecting machinery, GTO also keeps on hand a Condé Provac Industrial Pump, “which is ideal for jobs where the trap is located in a difficult area that the large trucks can’t access” says Mike. GTO chooses to use the Condé Provac unit because “it’s ideal for grease trap pumping, easy to maneuver in hard-to-get places, extremely quiet, and pumps an incredible 120 gallons per minute.” “It even have a built-in exhaust deodorizer that keeps foul odors at a minimum” a seemingly small feature that Mike and his crew found is much appreciated by their customers. “We strive to be a ‘one-stop-shop’ when it comes to servicing grease traps” Mike wants us to know. A typical service includes: “opening the trap, pumping, cleaning, and sanitizing the trap, then resealing it and finally flow testing it to assure all blockages have been successfully removed.” Website testimonials give evidence to the level of professional services that GTO provides. “It was a pleasant experience having my grease trap cleaned by GTO. The service techs were professional, quick and took care of everything. GTO is far above the company I previously used,” say a Richboro, PA Restaurant Owner.

One way contractors can get actively involved in grease trap servicing and grease hauling, and be assured that the customers they deal with are following all of the required, and ever-changing, rules and regulations, is to partner-up with a company like SLM Facility Solutions Nationwide. “SLM sources and manages a variety of competitively priced facilities and waste management service operations” says Rebecca Clauser, Vice-President and Director of Marketing at SLM. “With our national network of over 12,000 licensed and insured vendors in the waste, recycling, grease traps and cooking oil disposal business” explains Clauser, “we can easily design and manage a comprehensive program that meets the individual needs of clients and we can put them in touch with one of our grease trap servicing and grease-hauling contractors.” Ms. Clauser goes on to say that “waste reduction programs, or diversion programs, are becoming more popular as the practice of being sustainable is catching on. Many cities and counties are making it mandatory for all businesses within their locality to have a waste reduction program in place if they are not already doing so. Not having an active program could even mean fines and penalties.”

SLM is a committed company that offers a complete FOG collection and remediation solution to what could lead to potential health problems or flooding problems if the piping systems are full of FOG. Rebecca Clauser wants us to know that SLM “delivers a structured problem-solving approach to trash/recycling, grease trap pumping/jetting, plumbing associated with grease traps, cooking oil removal” and many other waste management services. SLM is “constantly researching FOG problems, solutions, and the ever-changing set of rules and regulations for FOD hauling and handling” so that “practical actions are taken at each of our client’s locations where savings are guaranteed.” Ms. Clauser provides this overview of SLM’s “FOG Program”:

As we have seen, FOG is a huge problem confronting any town or city with a municipal sewer system and water treatment program. The liquid waste industry has an important role to play in the FOG problem and its solutions. It’s only in the last decade or so that FOG has been a major focus and so both the laws and regulations for handling and hauling it, as well as the technologies being invented for dealing with it, are always being altered as well as evolving. Companies like GTO do admit that it is difficult to find proper dumping sites but that is also changing as more municipalities become aware of how to deal with FOG.

Some fascinating technologies are developing where the hauling and collection of FOG could, in itself, become profitable. For example, there are companies that will buy the “brown grease” collected from grease traps and recycle it into “bio-diesel.” Bio-diesel is a renewable source of energy that can play a part in helping to decrease human dependence on non-renewable and non-sustainable petroleum energy sources. Through a series of chemical reactions FOG, or its derivative, “brown grease”, is essentially transformed into a non-toxic, biodegradable, and renewable energy source. Bio-diesel is registered as a fuel and a fuel additive with the Environmental Protection Agency (EPA), and it even meets clean diesel standards. Plus, it is the only alternative fuel to have fully completed the health effects testing requirements of the Clean Air Act. 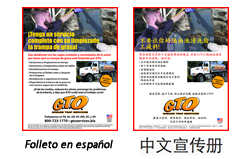 A System of Service

Click any logo to check out our other services.